Are You the Bear or the Salmon? 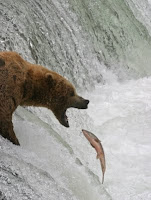 I just came back from a trip to the east coast for an evaluation conference. On the plane, there were a variety of videos played before and after the main movie.  One of them was a nature film about salmon swimming upstream to spawn and the challenges they face.  I was particularly interested in the bears.

The salmon were swimming upstream, struggling to make progress against the strong current, following an instinctual ritual that had been followed by millions of other salmon before. They kept swimming, regardless of what happened to the other fish in front of them - some made it, some were eaten. They continued to leap out of the water, persisting upstream through the rocky river, in spite of the danger of being snatched out of the air into a bear's mouth.

Some even adjusted their fishing strategy and started stepping on salmon to trap them before going after them with their strong jaws.

Lots of salmon died.  All the bears were fed.

The salmon just kept doing the same thing that millions had done before them.  No change in approach or tactic regardless of the risk.  Some made it, but the cost was high for those who didn't. The bears assessed the situation, applied a strategy, and modified the approach if it didn't work.

As a non-profit or school administrator, which are you - a bear or a salmon?
Posted by Grant Goddess at 12:10 PM