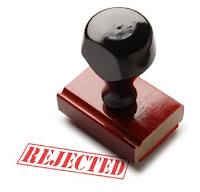 Grant writing rejection can be hard to take. Nonprofit consultant and grant writing expert, Derek Link, provides some tips on what you should do if your grant is rejected.

One reason that grant writers can fail is by taking on too many low percentage grants that are unlikely to be funded. Selecting grants to write is a delicate thing because as a grant writer you get so many requests from unqualified applicants.


It would be easy to take on lots of contracts from clients you know don’t have a prayer of getting funded, but then your reputation is nothing but a house of cards. Unless you want to move from state to state on an annual basis where nobody knows how unsuccessful you were the year prior, success is important!

Your reputation as a grant writer relies primarily on one thing - getting grants funded. Be prepared for rejection from time to time, because not every grant can be funded; not even the best written ones. Grant rejection is hard to take when you’ve written what you believe to be a good narrative. Getting rejected means doing some damage control with the client as well as preparing for resubmission when the opportunity arises.
Here are some ideas about what to do when your grant is rejected:
It’s a terrible experience to have to give a client disappointing news about a grant being rejected. Your clients put a lot of faith in your writing abilities and failure hurts your reputation as a “grant magician.” A failed grant in the early stages of a client relationship can ruin your relationship with them. Be wise about which grants you write and try to steer clear of lower percentage competitions with a client until you’ve had some success and demonstrated your competence. Once your relationship has been established, and your abilities are enshrined in the annals of their annual report, then you can survive a few rejections here and there.

Visit GrantGoddess.com for lots of great tips and ideas to help increase you grant writing success!