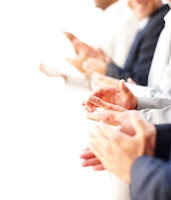 My Aunt told me a funny story about her little grandson to whom she had given a cookie She didn’t get a “thank you” from him and wanting to remind him of his manners, she said to him, “What’s the magic word?” to which he said earnestly, “abracadabra?”

Being on the same page with your supporters in terms of gratitude is important. Showing appreciation needs to be communicated carefully and with meaning. People give to nonprofits because they want to feel good and often that means they are acknowledged for their gifts.

I was talking recently to a friend of mine who has been volunteering with a local nonprofit organization for many years. He owns an art gallery and a few Saturdays ago he was working on some table decorations for a big event. I stayed around to help for a while because he was working all alone.

Last week I saw my friend again and asked him how the event went. He said that the event was fine but he was discouraged by the response he received from the nonprofit for all his hard work. The nonprofit recognized his gift of time, materials and effort with a form letter that didn’t even have an original signature on it! My friend was unimpressed.

Like my Aunt getting “abracadabra” instead of “thank you”, my friend felt as though there was no real appreciation for his effort. Saying thank you to supporters of your cause doesn’t have to be spectacular, but it does need to be communicated in a “language” they understand and value, one that communicates meaningful appreciation.

Saying thank you and meaning it is magical.

Become a member of GrantGoddess.com for even more suggestions about successful fundraising.
Posted by Grant Goddess at 8:45 AM